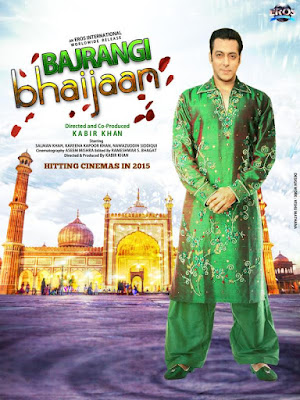 Bajrangi Bhaijaan is an upcoming Bollywood drama film which is directed by Kabir Khan.Bajrangi Bhaijaan stars Salman Khan,Kareena Kapoor Khan and Nawazuddin Siddiqui in the lead roles.Adnan Sami will be seen in an special appearance in the song titled "Bhar Do Jholi Meri".

The film is produced by Salman Khan & Rockline Venkatesh under the production banner Salman Khan Films and Kabir Khan Films.Music is composed by Pritam Chakraborty.The film is scheduled for release on 17 July 2015.

The story of Bajrangi Bhaijaan revolves around a 5 years old girl Munni(Harshaali Malhotra)from Pakistan who gets separated from her mother at an Indian Railway Station.How Pavan(Salman Khan) a devoted man undertakes the task to get her back to her motherland and unite her with her family forms the rest of the story.

Watch out the official theatrical trailer of Bajrangi Bhaijaan starring Salman Khan,Kareena Kapoor Khan and Nawazuddin Siddiqui in the main roles.The films trailer was released on 18 June 2015 by Eros International.

The album consists of 4 songs which are sung by Mika Singh,Atif Aslam,Adnan Sami,Vishal Dadlani, Nakash Aziz & Pritam, Rap by Badshah.