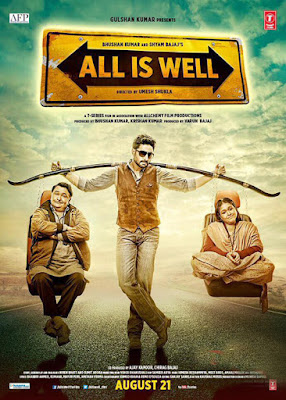 All is Well is an upcoming 2015 Bollywood comedy drama film which is directed by Umesh Shukla.Brothers stars Abhishek Bachchan,Asin,Rishi Kapoor and Supriya Pathak in the lead roles.Sonakshi Sinha will be seen in guest appearance in a song.

The film is produced by Bhushan Kumar,Kishan Kumar,Shyam Bajaj & Varun Bajaj under the production banner T-Series Super Cassettes Industries Ltd. and Allchemy Productions.Music is composed by Himesh Reshammiya,Amaal Mallik,Meet Bros Anjjan & Mithoon.The first look motion poster of the film was unveiled on 1 July 2015.The film is scheduled for release on 21 August 2015.

Movie : All is Well

All is Well Movie Story/Plot

All Is Well is about a road trip undertaken by Rishi Kapoor and Inder Bhalla (Abhishek Bachchan) who are later joined by their mother played by Supriya Pathak.In the journey they get to know things about each other that they never knew.It's a journey of fun,values,realisation and confusion where happiness does prevail.

Watch out the official theatrical trailer of All Is Well starring Abhishek Bachchan,Asin,Rishi Kapoor and Supriya Pathak in the main roles.The films trailer was released on 1 July 2015 by T-Series.

Listen to the official juke box songs of All Is Well which are composed by Himesh Reshammiya,Meet Bros Anjjan,Mithoon and Amaal Mallik.The lyrics are penned by Shabbir Ahmed,Kumaar,Mayur Puri and Amitabh Verma.The soundtracks of All is Well were released on 20 July 2015 under T-Series label.