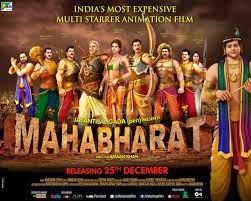 Amaan Khan's most awaited 3D animated film "Mahabharat",is releasing on Christmas Day i.e,tomorrow.And the director stated that it is a result of 7 yrs of hard work.

Popular actors like Amitabh Bachchan, Sunny Deol,Ajay Devgn, Anil Kapoor,Jackie Shroff, Vidya Balan,Manoj Bajpayee and Anupam Kher have lent their voice for various characters in the film, which is based on the epic “Mahabharat”.

Amaan Khan says “It’s a time consuming process and we started working on the film in 2007. We started with scripting and then dialogue writing,” and further added that we have to finish the dubbing first as it was an animated film.

“So we had to get the stars on board for the voiceover. Once the dubbing was done, we started working on the visuals. So technically, it took seven years to complete ‘Mahabharat’,” Khan said.

According to a report by FICCI-KPMG, the estimated size of the Indian animation industry is around $200 million (about Rs.1,100 crore), but Khan says that the genre has not been explored the way it is being done in Hollywood.

He said “As a filmmaker I want to break all the barriers. We hope more filmmakers make animated film and we will have more audiences to watch it. From the producers’ point of view, it’s a huge risk though.

“I want to attempt something that has not been done before. Animation in India has not been explored as much as in Hollywood.”
/[ 0 comments It took 7 years to make ‘Mahabharat 3D’ : Amaan Khan]\