Facebook has introduced a new Like button for its social networking site which is redesigned of the earlier thumbs-up icon.
Ray,the software engineer of the social networking site has redesigned the Like button, with the Facebook logo in lowercase.According to ABC News, the company has also made the logo a darker shade of blue, and also changed its font apart from providing websites option of lumping the Like and Share buttons together. He said that in the coming weeks the new buttons will be rolled out to everyone. 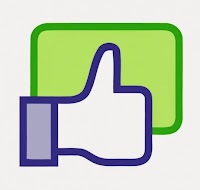 The report said that many websites have already undergone the transformation and incorporated the new Like + Share button.