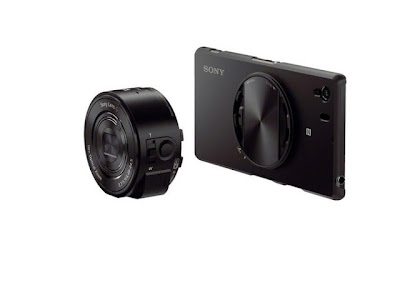 According to the leaked press release, these cameras can be easily connected using WiFi to smartphones, converting the phone's screen into a real-time viewfinder. Using Sony's Play Memories Mobile app, users can release the shutter, start/stop movie recordings, and adjust common photographic settings like Zoom, Auto Focus shooting mode, and more on these lens cameras.

These lens cameras also support NFC connectivity for easy access. The DSC-QX10 and DSC-QX100 lens cameras can be easily handled anywhere, and can also be attached to smartphones using mechanically adjustable adapter or even mounted to a tripod.

The release also revealed the pricing of the Cyber-shot QX10 and QX100 lens-style cameras. According to the release, the DSC-QX10 will cost $250, whereas DSC-QX100 will cost $500 only.


DSC-QX100
DSC-QX100 will feature a high-quality 1.0" 20.2MP Exmor R CMOS sensor, which is the same sensor find in the Cyber-shot RX100 II camera, which costs $750. The sensor has been combined with a wide-aperture Carl Zeiss Vario-Sonnar T lens with 3.6X optical zoom and a powerful BIONZ image processor. The QX100 weighs only 179 grams and comes with 16GB internal storage with 64GB expandable memory via microSD card.

To know more about how these lenses works, have a look at below video