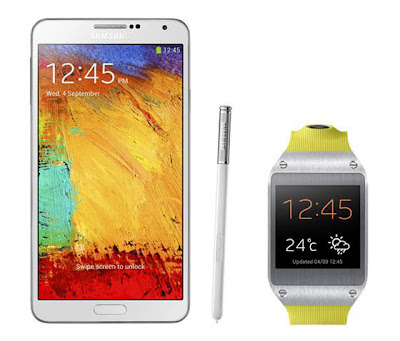 Samsung has recently launched its new Galaxy Note 3 and Galaxy Gear Smartwatch officially at a press event held in Berlin on September 4th.Now Samsung is officially going to launch its 2 new gadgets on September 17 in New Delhi at Indian Tech press meet.

Samsung Galaxy Gear sports a 1.63-inch Super AMOLED display and it is powered by a 800MHz processor. The smartwatch comes with 512MB of RAM.The 1.9-megapixel camera on the wristband can take photos or short videos that can be stored temporarily with about 4 GB of internal storage on the watch or you can sent directly to your mobile device.
/[ 0 comments Samsung Galaxy Gear Smart Watch & Note 3 Launching in India on September 17]\