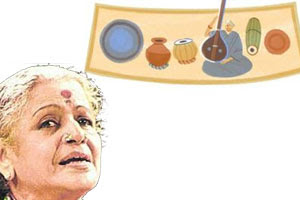 Google today paid tribute to the renowned Carnatic music M S Subbulakshmi by dedicating a colour doodle on her 97th Birthday.
Today's Google doodle features a portrait of Subbulakshmi playing the instrument veena along with other instruments used in Carnatic music including ghatam, tabla and mridangam.

She is the first Indian musician to be honoured with the country's highest civilian honour,Bharat Ratna in the year 1998, and the prestigious Ramon Magsaysay award in the year 1974.M. S. Subbulakshmi  was born on September 16, 1916, in Madurai to Subramania Iyer, and Shanmukavadiver Ammal, a Veena player .In 1929, she gave her first public performance at the age of 13.

At the age of 88,Subbulakshmi died in Chennai on December 11, 2004.
/[ 0 comments Google Doodle Pays Tribute to M S Subbulakshmi on her 97th Birthday]\