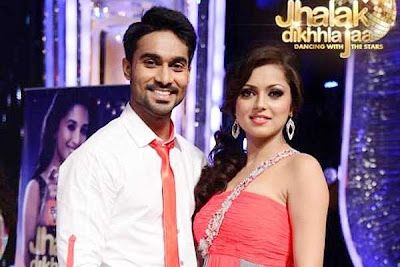 Hrithik and Priyanka Chopra have attented the finale for promoting their upcoming film "Krrish 3".The cast of popular comedy show on Colors Comedy Nights With Kapil, including the famous Dadi and kukki were entertained the show.

The Judges of JDJ 6 are Karan Johar,Madhuri Dixit & Remo D'Souza.Madhuri Dixit's has left the show in the middle as she got a news that her father was expired and she has leave immediately.

She has to perform  an areal dance number in the finale which got cancelled at the last minute.And to fill that place, Contestants Lauren and Sonali gave a commendable performance.The winners of JDJ 6 Drashti & Salman have received a check of RS. 50 Lakhs.

Winning Order of Top 4 Contestants of Jhalak Dikhla Jaa 6 are as follows: