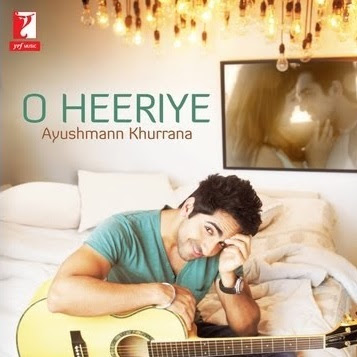 Yesterday Ayushmann Khurrana's first single "O Heeriye", has been released by Yash Raj Films.
O Heeriye features Rhea Chakraborty along with the Ayushmann talented singer-actor.The tagline of the song is  -'However messy it is... always be in love'.

Ayushmann has been an ardent music lover says that O Heeriye is a special song for him.His first Bollywood song was Paani Da Rang from the movie Vicky Donor, which was his debut film in Hindi.Ayushmann also sang two songs Tu Hi Tu and Saddi Gali - in his next flick, Nautanki Saala,but the movie failed at the box office.

Before entering in to the films Ayushmann has been a Radio Jockey, TV anchor and VJ.Ayushmann's next film is YRF's untitled project with co-star Sonam Kapoor.
/[ 0 comments Ayushmann Khurrana's First Single "O Heeriye" is Out Yesterday]\