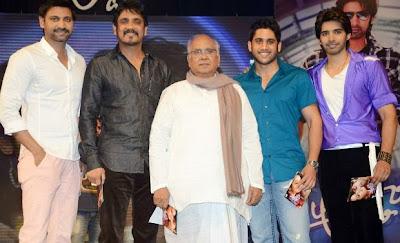 Tollywood's Famous Actor Akkineni Nageshwara Rao, popularly known as ANR, was born on 20 September in Andhra Pradesh to a poor farmer's family. His formal education was limited to primary schooling due to his parents' poor economic conditions. Before entering in to films ANR spent a lot of his time performing in theatre. ANR married to Annapurna Akkineni in the year 1933. His wife died in the year 2011.

They have 5 children Venkat, Nagarjuna, Sathyavathi, Naga Susheela and Saroja.His younger son Akkineni Nagarjuna is also a popular actor in Tollywood.His grandchildren  Sumanth, Sushanth, Naga Chaitanya and Akhil Akkineni all of them are in the film industry as well.

In 1957, he portrayed Abhimanyu from Mahabharata in the movie 'Mayabazar' and it went on to become one of India's most celebrated movies ever. It was re-released in 2010 in a colour format.He dominated the Tollywood screen from the 50's to the 80's with stellar performances in 'Doctor Chakravarthy', 'Mooga Manasulu', 'Antastulu ', 'Sudigundaalu', 'Seetharamaiah Gari Manavaralu', 'Meghasandesam '.

With more than 250 movies, the legendary actor and King of the Akkineni clan, Akkineni Nageswara Rao, turns 90 today!.Currently he is shooting for Manam movie along with his son Nagarjuna and grand son Naga Chaitanya.Here’s Indian Reads wishing this legendary actor a very Happy Birthday!

Akkineni Nageswara was a famous actor in Tollywood. He was one of the best actors known for his acting. He has worked in very good films. Thanks for sharing this informative post. Check here to read out more Naga Chaitanya Net Worth In 2022