Aamir Khan to Receive 'US Award' for 'Satyamev Jayate' 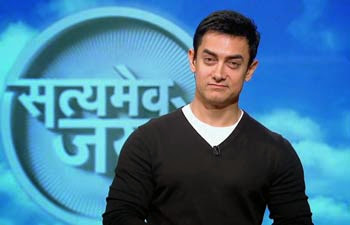 Bollywood superstar Aamir Khan has been selected for a US award for his popular television show 'Satyamev Jayate' along with American director Kathryn Bigelow and the International Center on Nonviolent Conflict (ICNC).

They will be honoured at the inaugural awards dinner by the America Abroad Media (AAM) in Washington DC on October 28.

America Abroad Media said"Their work exemplifies the power of media to inform, educate and empower citizens about the critical social and public policy issues of our time," in a statement.

AAM said Aamir's TV series, 'Satyamev Jayate', explores India's biggest social challenges and has been seen by hundreds of millions of people in his country and across Asia.

Recently he was also selected as one the 100 most influential people of TIME Magazine's.
/[ 0 comments Aamir Khan to Receive 'US Award' for 'Satyamev Jayate' ]\