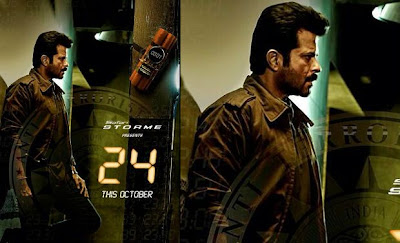 Bollywood actor Anil kapoor unveiled the first look of his debut television production "24",which is a suspense drama series based on the American series of the same name.
The actor who recently joined the micro-blogging site Twitter,shared the first look 24 poster in his page.
He also tweeted "First look of '24 India'! The teaser looks great. Can't wait to show it to you guys," Kapoor posted.

The Indian version of the show is directed by Abhinay Deo and written by Rensil D'Silva.Besides Anil Kapoor,the show also stars Mandira Bedi,Tisco Chopra.Actor Anupam Kher will do a cameo-as a Research and Analysis Wing officer-in the series.

The show will air on Colors Channel from this October.
/[ 0 comments Anil Kapoor's 24 First Look Unveiled]\